Given the auction grade, age and low kms, the condition was not quite as good as we were hoping, and for this reason we recommended to our client to pass on this vehicle and keep searching for one in better condition. The reasons for this are as follows.

The RHR quarter panel had a horizontal scratch starting at the top centre of the wheel arch and extending about 30cm long back along the body and about 7cm into the door itself. This had been touched up, and was hard to see if standing back from the car but certainly visible up close.

There were a few small scratches around the rear hatch opening most of which would buff out.

Over the body there were some small swirl marks and finger nail scratches, most of which would also buff / polish out.

The left front fender had several small scratches which would also buff out, being not that deep.

Also some scratches were noted on the left side door scratches but they were not very noticeable.

Underneath we observed some surface rust and in the engine bay there was surface corrosion on aluminium parts which on a 4WD car of this age and from this region of Japan usually indicate use in the snow.

It was also fitted with aftermarket suspension / coilovers, the springs were original but the lower part of the springs had an adjustment fitted and the aftermarket struts (TANABE) were also adjustable. This would generally indicate that a set of larger wheels were fitted to the car previously, but had been removed prior to trade-in / auction and the factory wheels re-fitted.

Original suspension was included in the back of the vehicle inside the Tanabe boxes.

While this was still a decent car and none of the issues overall would exclude it for import generally, when sourcing vehicles for clients we aim for better condition for age than this vehicle presented in.

Also, vehicles with this grading can sometimes sell for similar prices whether they are in the below average condition we found with this one to be in or pristine near new condition, depending on whether others bidding inspect the vehicle for themselves or bid sight unseen.

This is an example of why it’s not a good idea to buy a vehicle from auction without inspection even if it has a high grading. Gradings are variable and there are many grade 4 and above cars which are not up to our standard for various reasons.

In contrast, this 2011 E52 Elgrand in very clean condition is the sort of vehicle we do recommend.

Whether you’re looking for a 2012 Toyota Vellfire HYBRID ZR Edition model 2.4L 4WD like this, or another year or model of vehicle we can find it for you in nice condition. 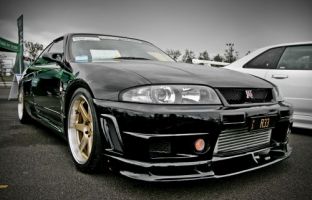 I’m looking for some advice about an R33 GTR import.

A few friends of mine have bought Skylines through you and haven’t had a problem, so you come highly recommended! 🙂